The AR-15 remains one of the most popular weapons that shooters like to build. This allows builders to piece together an AR-15 with individual parts, essentially from scratch. Doing so starts with obtaining the firearm component itself. The stripped lower receiver (the empty housing containing the trigger, magazine, safety, and related components) is the only part of the AR-15 legally considered a firearm. All other parts — the upper receiver, barrel, trigger kit, and all other components — are not considered firearms and can be purchased like any regular consumer good.

Thanks to the Gun Control Act of 1968, which allows a private, unlicensed individual to build a firearm at home from scratch with no paperwork required, there are two ways to obtain a stripped receiver. Buy one, or build one with an 80% lower receiver, a firearm blank. Before we dive into what that is, we need to understand exactly what constitutes a firearm in the eyes of the law.

How ATF Classifies the AR-15 as a Firearm

The Bureau of Alcohol, Tobacco, and Firearms (ATF) has adopted this definition of what a firearm legally is. The agency currently applies this definition to the AR-15’s stripped lower receiver: 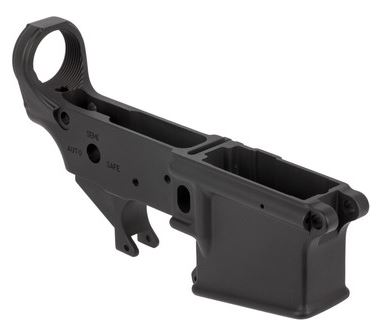 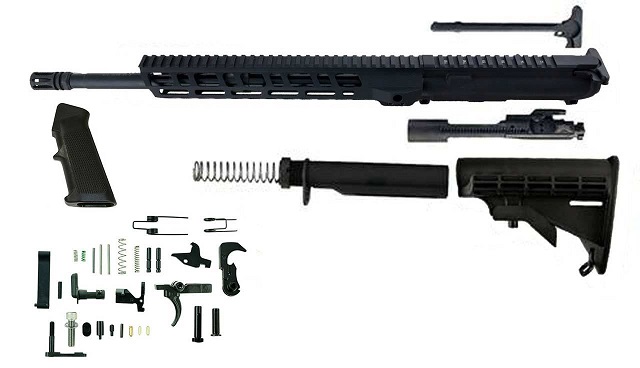 The AR-15 parts that are not considered a firearm include:

Since the stripped lower is the only component considered a firearm, all other parts and assemblies can be purchased legally without visiting an FFL (Federal Firearms Licensed) dealer. That includes the upper receiver. You don't need to conduct a background check or fill out paperwork to purchase any of the above components.

What is an 80% Lower Receiver? 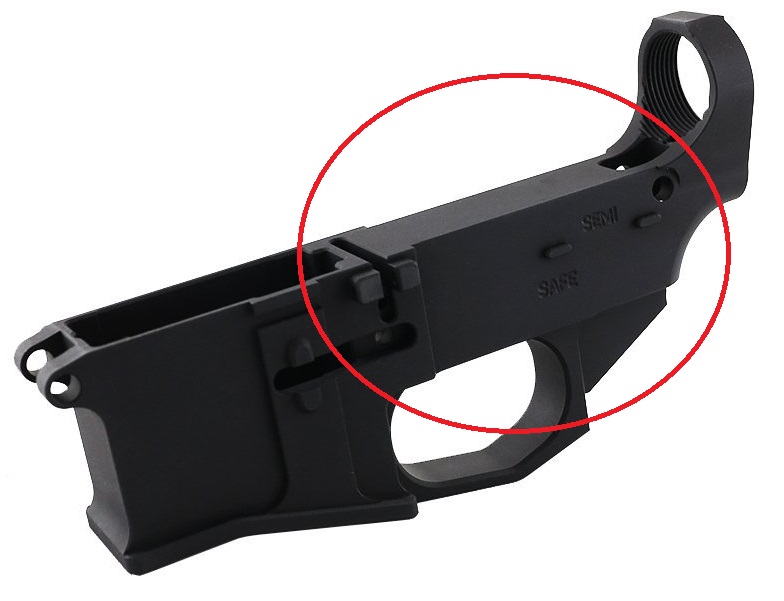 The 80% lower receiver is an  incomplete stripped lower receiver which does not legally meet the ATF’s or federal law’s definitions of a firearm. Here’s what the agency has to say:

“80% receiver,” “80% finished,” “80% complete,” “unfinished receiver” are all terms referring to an item that some may believe has not yet reached a stage of manufacture that meets the definition of firearm frame or receiver found in the Gun Control Act of 1968 (GCA). These are not statutory terms or terms ATF employs or endorses.”

The ATF officially calls 80% lowers, receiver blanks. This is how they define them:

“Receiver blanks that do not meet the definition of a “firearm” are not subject to regulation under the GCA. The ATF has long held that items such as receiver blanks, “castings” or “machined bodies” in which the fire-control cavity area is completely solid and un-machined have not reached the “stage of manufacture” which would result in the classification of a firearm per the GCA.”

Circled above and shown below, the 80% lower receiver isn’t considered a firearm because it’s not capable of accepting any other parts. The fire control cavity where the trigger and lower parts kit go is still solid aluminum. There are no pin holes for the hammer, trigger, or safety selector lever. You, the builder, are responsible for completing the final steps to fabricate the receiver blank, turning it into a firearm by definition.

This visual comparison is taken directly from the ATF’s website (click the definition link above) and provides an illustration for how they physically separate an 80% lower from a stripped lower receiver (a firearm): 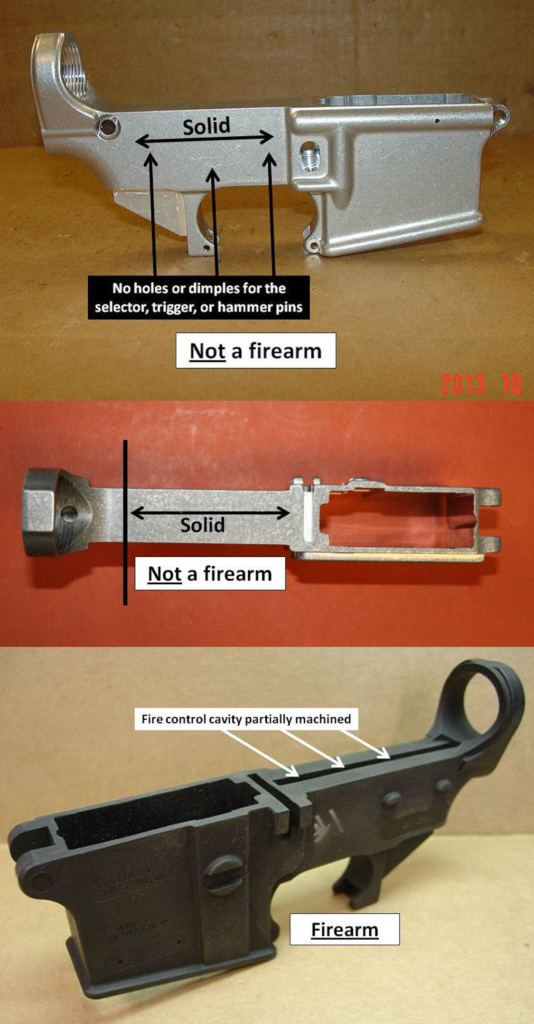 Yes. If you’re not a convicted felon and can otherwise legally own a firearm in your state, federal law says, per the 1968 GCA, you may build a firearm at home from raw or unfinished components. The firearm in question does not need a serial number. You do not need to submit to a background check, file any paperwork with the ATF or a local FFL, or pay any special fees or taxes.

With a receiver blank completed, buying all the other parts needed to finish your build is easy. Conventional build kits are available which include all the necessary components.

NOTE: This only applies to federal  law. Certain states, like California, New Jersey, and New York have either placed restrictions on 80% lower receivers and homemade guns. Read our full guide on state and federal 80 percent lower laws here.

“Are there any requirements or paperwork to buy one?”

No. Because a receiver blank isn’t considered a firearm, it’s treated like any other consumer product (again, at the federal level). You may purchase one and have it shipped directly to you. It doesn’t need to go through an FFL’s shop with transfer paperwork like a firearm would. States that have banned 80% lowers currently restrict their sale and shipment. We encourage you to review the guide above, which also covers relevant and recently-enacted state laws.

“How do I complete my receiver blank?”

The process for completing a receiver blank is mechanically simple: The fire control cavity that houses the trigger and parts kit needs to be hollowed out. Then, the pin holes for the hammer, trigger, and safety need to be drilled. This process takes 30 minutes to 2 hours and is accomplished using something called an 80% jig. The jig is a gunsmithing tool kit that uses metal templates to automatically measure where you need to cut and drill, and most jigs include the required drill bits and end mill bits, which can viewed here.

NOTE: As exampled by the ATF’s photos above, even partially machining a receiver blank may constitute it being legally defined as a firearm. You shouldn’t begin cutting or drilling your 80% lower until you’re confident and ready to accept the responsibility of owning an AR-15 in the eyes of the law. Want to see how it’s done step-by-step? We’ve written two guides to help you with this project!

“Do receiver blanks exist for other calibers and weapons?” 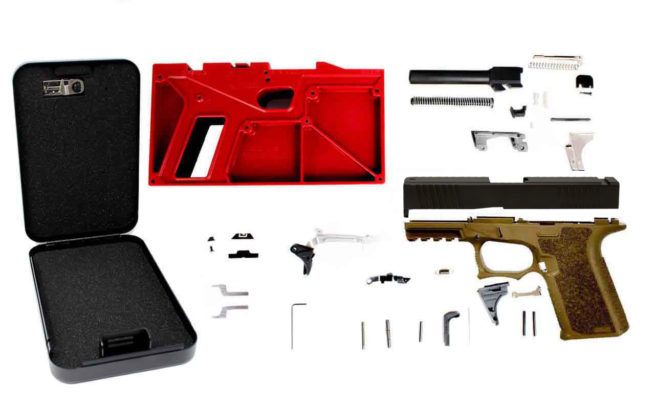 Yes. The AR-15’s lower can be used to build a rifle, SBR, or pistol chambered in 300 Blackout.  This guide compares all available 80% lower receivers (calibers and platforms) to help you decide what to build. Currently, 80% receivers and 80% frames exist for the following platforms:

We are a national retailer of individual components and not all products depicted on this website are legal in every state. Shipping of various products found on this website are prohibited to some states (such as California, Connecticut, District of Columbia, New Jersey, New York, Pennsylvania, and Washington). The information, pictures, text or products presented on this website are not a representation by us, and should not be understood by you, that any product or completed firearm is legal to assemble or own in your state of residence. We encourage each and every builder to perform their own research about the state and federal laws that apply to them. It is your responsibility to understand the law and we encourage you to consult with an attorney or your local ATF representative.