If you're reading this, then by now you probably figured out that an 80% lower receiver is used to build an AR-15 rifle or pistol at home. But why would you bother with an 80% lower instead of just buying any old stripped lower or commercially branded AR-15 from your local gun dealer? Let's look at the benefits of building your rifle or pistol using an 80% lower or frame.

Your new AR-15 will be un-serialized 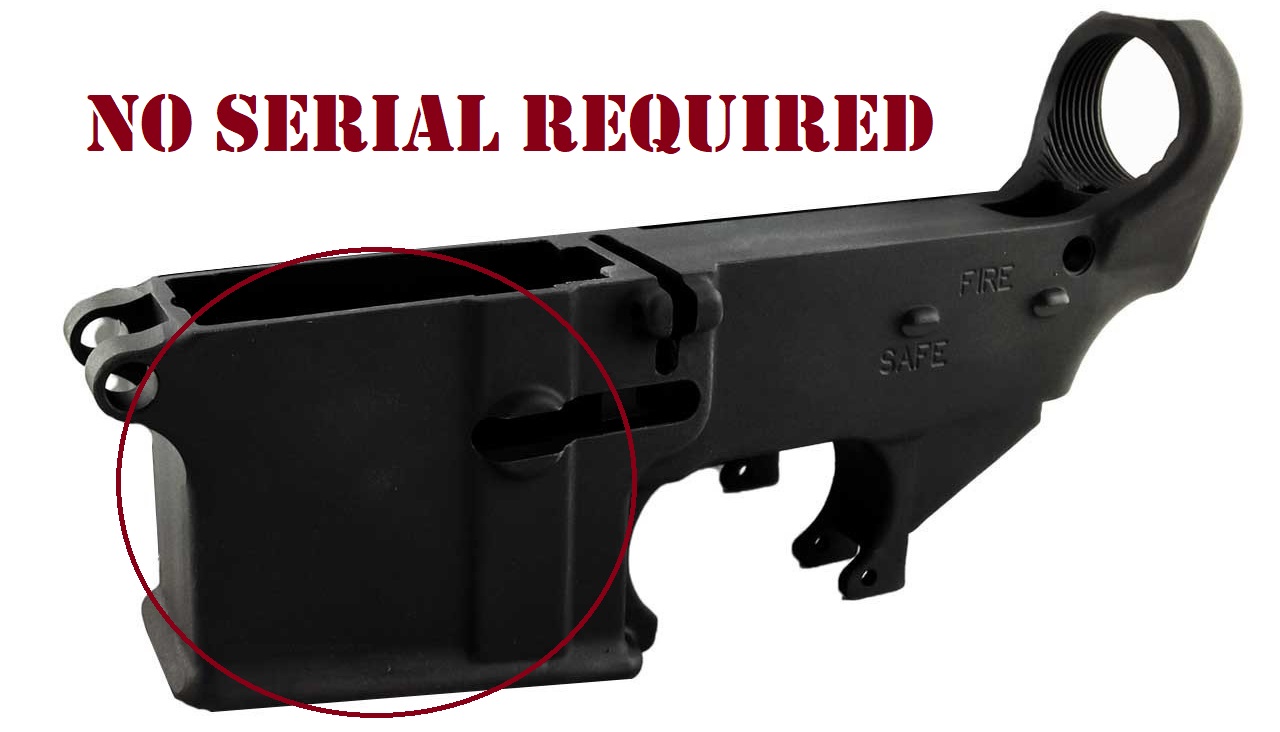 We're not advocating that anybody who cannot legally own a firearm go and build an 80% lower in order to get their hands on an AR-15 or any other firearm illegally. With that said, you're probably a gun owner who sees the writing on the wall: The Second Amendment is constantly being chipped away by new gun control laws at the local, state, and federal levels. Some states have banned the AR-15, and many legislators have called for a new assault weapon ban. Other elected officials, like Beto O'Rourke, have taken it a step further by seeking to enact forced gun buy-backs, which are little more than gun confiscations. Joe Biden's "plan to end gun violence" includes such proposals.

Even though federal law prohibits an official firearm registry from being created to track individual guns and their owners, the National Instant Criminal Background Check System (NICS) still records your personal information when you purchase a firearm through an FFL. That information includes your name, address, the firearm make and model you're purchasing, and its serial number. Every firearm produced by manufacturers in the U.S. and its serial number are logged with the ATF before distribution and sale. Although officials deny this information is permanently stored on federal databases, FFLs -- the individuals and companies you purchase your firearms through -- must retain every purchase record, called a Form 4473, for twenty years. And although no gun registry officially exists in the U.S., this very data has been used by law enforcement to track individuals and confiscate their firearms, in part thanks to new "Red Flag" laws.

Building an 80% lower prevents agencies from tracking you and your firearm.

Building your AR-15 using an 80% lower means you avoid having both your personal information and your new firearm logged with the ATF and other agencies. Because 80% lowers are manufactured by non-FFLs and because they aren't engraved with unique serial numbers, each unit produced isn't tracked by the ATF. You don't need to have your lower shipped to an FFL or transferred with any paperwork when you purchase, either. It simply ships straight to your address. While we can't predict the future and we again don't advocate that you or any gun owner seek to break the law. But we can say the AR-15 and many other rifles and handguns are always at risk of being banned and their ownership potentially made illegal.

You avoid extra taxes and fees

Many states have placed high taxes on firearm sales. When you purchase a firearm from a dealer, you must also pay fees for a background check and firearm transfer paperwork processing. But building your AR or handgun using an 80% lower means you get to avoid all this. Unfinished lowers and frames don't meet the federal definition of a firearm, and they don't meet most states' definitions either. That means they're sold to consumers like any other product and aren't subject to those extra taxes and fees. States like Nevada, California, and Connecticut charge anywhere from $25 to over $100 for a firearm purchase, which doesn't cover taxes. A federal bill, H.R. 5717, currently resides in Congress which would impose a 50% firearm sales tax.

You can complete multiple 80% builds

It's no question you'll wind up spending some extra cash to purchase the right tools for completing your 80% lower or frame. But once you own the required tools -- specifically, the jig and bits for cutting and drilling your new firearm -- you can easily complete multiple lowers and frames for multiple builds. With each new build, you get to avoid all those taxes, fees, retail mark-ups paying for branded guns, and all the paperwork. If you're sticking with the highly customizable AR-15 lower as your weapon of choice for your 80% build, you can also use your jig and tooling to complete a receiver for a rifle build, a pistol build, a 300 Blackout build, and an AR9 build.

Unfamiliar with the build process? Read this: "What's an 80% Jig?"

You get to build a custom AR

Most commercially available AR-15s come with the same basic set of features: A two-piece handguard, a six-position M4 buttstock, a single-stage trigger, and a basic 16" barrel with some an A2-type or similar muzzle device. When you buy an AR that's configured by a manufacturer, you're paying extra for the brand but more importantly, you're paying extra for parts you'll probably swap out later. When you build your rifle or pistol from the ground up using an 80% lower, you get to pick each component based on your needs and budget. Yes, you could still build a custom AR by buying and assembling a commercial stripped lower, but you'll likely pay extra. That brings us to our next point.

Branded AR-15s being sold at gun dealers and big-box sporting goods stores are, perhaps now more than ever before, seeing higher prices and dealer mark-ups. Just four large manufacturers produce over 90% of the parts that all those AR brands use to make their rifles, so why pay extra for the same parts based on the brand name? When you pick an 80% lower for your build, you're avoiding paying for a particular brand and their higher prices. You're free to shop for the least expensive 16" barrel, and you get to decide where you buy that free-float M-Lok handguard or upper receiver.

You don't need a license or permit to build

Contrary to popular belief, any individual can build a firearm from scratch without the need to possess a Federal Firearms License (FFL). So long as the weapon in question is built for personal use and isn't an NFA item, like a short-barreled rifle, you can legally make your own gun at home without ever having to visit an FFL or conduct a background check. Of course, this only applies under federal law. Some states have placed restrictions on this practice or have already banned 80% lowers.

Click here for a full review of state and federal 80 percent lower laws.