The AR-15 can sling rounds out to 500 meters and beyond. But getting that level of accuracy out of the rifle you’re (hopefully) building with an 80% lower from scratch means picking the perfect upper - really, the barrel matters most - to finish the build. Whether it’s 55-grain .223 Remington or 72-grain 5.65 NATO, barrel length and twist rate will make the difference between MOA accuracy and rounds that miss your target.

So, what is the best AR-15 barrel length and twist rate? Let’s learn how these two things contribute to accuracy and distance. Then we’ll compare the most popular .223 and 5.56 bullet weights and explain what barrel’s likely best for you, based on your choice in ammo.

Sixteen inches is the shortest legal barrel length you can install on your black rifle if it’s not a pistol. Technically, you could opt for a short 14.5” (or even shorter) barrel, but you’ll need to either ditch the buttstock, fill out the paperwork to own an SBR, or you’ll need to permanently install a muzzle device to bring it back up to 16”.

Most black rifles and AR-15 build kits don’t just come with a 16” barrel because it’s the minimum legal length – it’s the most popular barrel length because it affords the most velocity in the shortest possible length. Basically, going any longer than 16” gives a negligible increase in bullet velocity, and a longer barrel is only needed if you're trying to max out the potential distance of the 5.56 or .223 cartridge.

Let’s look at some ballistics data to visualize all this: 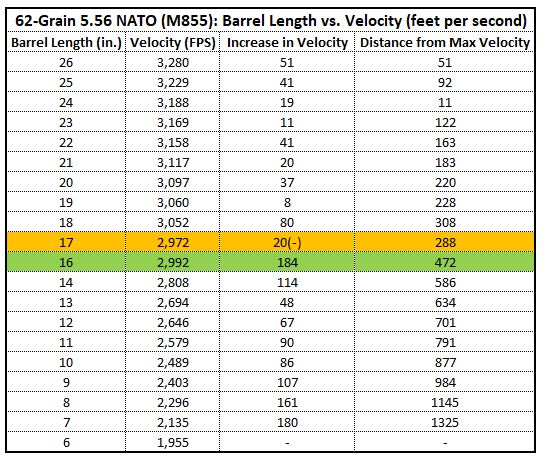 Looking at the velocity-to-barrel-length chart above, you can see that as barrel length increases from 6” up to 16”, velocity too increases consistently. But when you reach 17”, something weird happens: You actually lose 20 feet per second! And as barrel length continues to increase up to 20” or more, the gain in velocity decreases to just a few feet per second more (FPS). Even by maxing out at 26”, we still don’t reach the maximum velocity of 5.56 NATO’s M855 round.

As you increase barrel length, factors like trigger squeeze, sight picture, and length of pull become more important. Longer barrels are more susceptible to shooter error. Jerking the trigger on a 20” barrel will move you off-target quite a bit more than if you were to yank the shot left or right with a 16” barrel.

We don’t need a 20” or longer barrel to reach the round’s maximum velocity, unless we're chasing crazy distances.

Barrel length is not as important as twist rate. When you’re picking the perfect barrel for your AR-15, twist rate and the weight of the ammo you shoot is what matters most.

Twist rate is measured as a ratio of the distance the rifling travels down the barrel before completing one full rotation. For example, rifling that has a 1:7 twist rate makes one full rotation every seven inches. A 1:12 twist rate makes one rotation every foot. Lighter bullets demand a slower (higher-numbered) twist rate, while heavier bullets require a faster (lower-numbered) twist rate. Luckily, plenty of ballistics data already exists to figure out what twist rate is best for each AR-15 load. Let’s compare them all:

We sized up the most popular twist rates with the most common grain weights for your convenience:

(Not pictured) These super-light loads aren’t very common, nor is the old-school 1:12 twist rate. When the black rifle was designed in the 60’s, its first cartridge – the .223 Remington – was still considered a varmint round. Testing the first design, engineers stuck with light loads, typically maxing out at 55 grains. This is why old AR-type rifles like the M16A1 sport very low twist rates, like 1:12 to 1:14.

The 1:9 twist rate is popular for lighter loads which are typically used for plinking, target practice, or 3-gun competitions. This is a popular twist rate if you want to stick with the most popular XM193 (55-grain) cartridges. The 1:9 rate will also handle mid-weight cartridges like the common 72-grain load.

For shooters who like the popular M855 62-grain “green tips”, a 1:8 twist rate will work best. It does a better job of stabilizing these heavier steel-core rounds. It’ll still work well for light-grain loads, save for the ultralight 40-grainers.

This faster twist rate is preferred for the heavy-hitters and shooters who like to get extra distance. This rate is optimal for the popular 77-grain loads from Sierra MatchKing. Throwing some light-grain loads through this fast twist rate might work but shot groups will likely be inconsistent.

While having a twist rate that's too low may negatively affect accuracy to some degree, running a twist rate that's too fast could have even worse consequences. Over-stabilizing a round that's too light with a twist rate that's too fast can create excess rotational force. This can cause the round to literally break apart mid-flight. For example, firing a light 55-grain .223 round out of a 16" barrel with a 1:7 twist rate will yield a velocity of approximately 3,000 feet per second. At this rate of speed, the bullet is spinning at over 308,000 times per minute. If that bullet were rolling along the ground on its side, it'd accelerate from 0 to 205 MPH almost instantaneously (though realistically, it'd simply break apart).

Over-stabilization can exaggerate tiny imperfections in a bullet's jacket or lead core. These imperfections paired with excess force are what typically cause rounds to fly apart before hitting their target. And even if a round is technically "perfect" and balanced along its center axis, firing a light round through a fast twist rate can damage the bullet itself, creating dynamic instability. Basically, the bullet gets scorched by the rifling's lands and grooves, throwing off its center mass.

The effects of over-stabilization, illustrated:

This is how an over-stabilized bullet will likely travel when it's flying through the air:

Yaw causes the bullet to twist or oscillate about its vertical axis, "tumbling" forward. This is the most common result of over-stabilization. Precession causes the bullet to spin around its axis in the direction of flight. You can visualize this by pointing your finger forward and rotation it around, making a circle in the air. Nutation is the rocking or swaying of the axis of rotation itself, causing the bullet to gyrate. Think of the bullet as being trapped inside a hula-hoop as it flies forward.

All of these effects utterly kill accuracy.

Even balanced, quality ammunition fired from an appropriately rifled barrel will exhibit some sort of yaw, precession, or nutation (rocking or swaying on the axis of rotation). These effects usually dissipate quickly as the round loses velocity and the spin of the bullet forces it to fly straight. But over-stabilization exaggerates these effects to such a degree that you may end up with something called a "keyhole shot" if the round doesn't fly apart.

The effect is aptly named as the round itself penetrates the target on its side, making the shape of a keyhole (circled in red above). While the result might be humorous to see, it's sure evidence of two possibilities:

We are a national retailer of individual components and not all products depicted on this website are legal in every state. Shipping of various products found on this website are prohibited to some states (such as California, Connecticut, District of Columbia, New Jersey, New York, Pennsylvania, and Washington). The information, pictures, text or products presented on this website are not a representation by us, and should not be understood by you, that any product or completed firearm is legal to assemble or own in your state of residence. We encourage each and every builder to perform their own research about the state and federal laws that apply to them. It is your responsibility to understand the law and we encourage you to consult with an attorney or your local ATF representative.