You might've come here from our guide on How to Build a 1911 with an 80% Frame. Or, maybe you're just here out of curiosity. Either way, this guide compares the 1911's retail frames to their 80% counterparts. We cover the full-size Government, Commander, and Officer models,

DISCLAIMER: We're not lawyers, and nothing in this guide should be misconstrued as legal counsel. This guide is for educational and entertainment purposes only. Consult with an attorney before building a firearm in your state.

The semiautomatic, .45 ACP-chambered Model 1911 pistol was designed and introduced by legendary gun maker John Browning. The aptly-named pistol was introduced the year of its name, beating out the Luger pistol (chambered in 9x19mm Parabellum) for its initial military contract. The M1911 has continuously been in service ever since, making it one of the oldest original firearm designs still employed by modern militaries today.

Browning's other notable creations include the famed M1917 and M1919 machineguns, and the Browning Hi-Power pistol. But the M1911 remains his greatest creation with over 2.7 million units produced and still in service in 20 different countries. 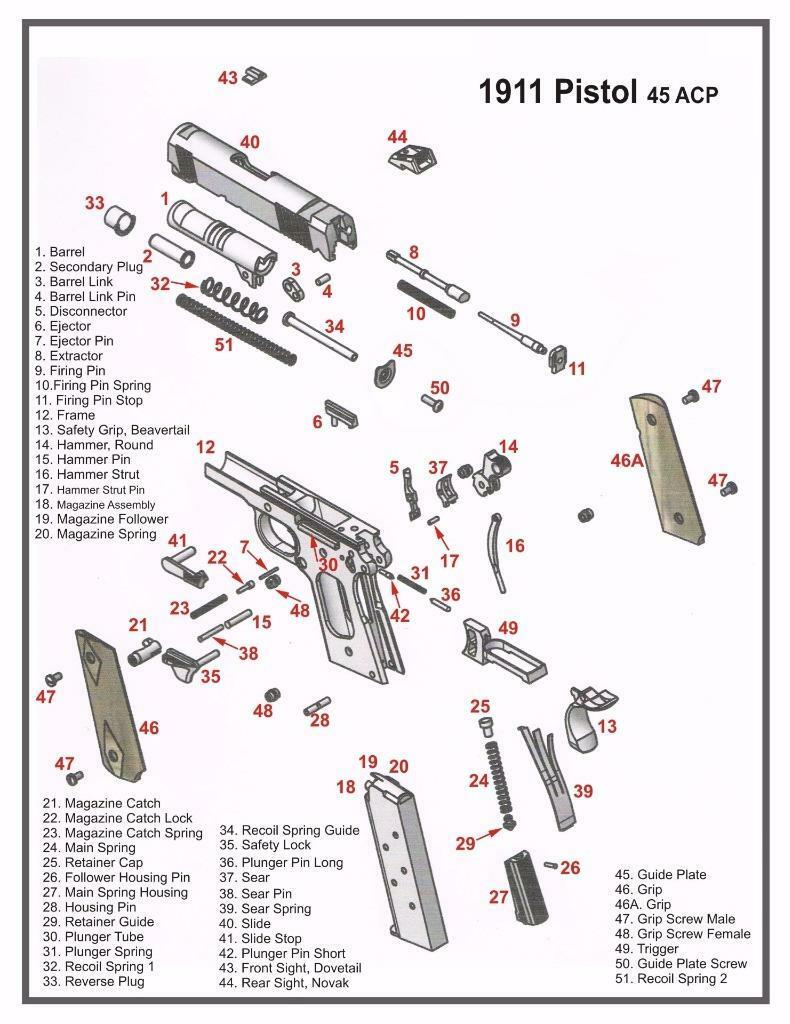 This diagram illustrates the 1911's design, which has largely remained the same to this day. Modern variants are available with new springs and triggers, but the gun's basic operation, parts, and overall dimensions are the same as they were over 100 years ago.

The 1911 uses a locked breech recoil system to cycle rounds. As a round is fired, pressure builds inside the chamber and barrel (#1) until a sufficient amount "unlocks" the breech, forcing the slide (#40) backwards and ejecting the spent shell casing with the extractor (#8). A recoil spring (#32) slams the slide forward, chambering another round.

The 80% 1911 frame is a firearm frame blank that is mostly fabricated, but not yet functional. The blank is inoperable. You can't install a slide, barrel or any other parts on it, and cannot be made to fire without cutting and drilling some excess aluminum, first. It is therefore not considered a firearm under the Gun Control Act of 1968. The ATF can only define and regulate firearms. They don’t regulate receiver blanks, frame blanks, or inoperable stuff. In their eyes, the 1911 frame blank is no different than a piece of raw aluminum you bought at a hardware store.

But are these frame blanks truly the same when compared to a retail 1911, say from Springfield, Kimber, or the like?

The short answer is yes.

These frame blanks, once cut and drilled, function with the exact same parts and dimensions as a gun you bought at the local sportsman's shop (minus the extra taxes and fees). We threw together some visual comparisons between the two:

Today, the 1911 is available in different configurations: Government (full-size), Commander (compact), and Officer (sub-compact). Each variant uses the same types of components and each is configured the same way. External and internal dimensions will vary, so not all parts are interchangeable.

The Government 1911 is considered the "O.G." shooter. It's John Browning's original design, sporting a 5" steel frame (often called a Government frame) and built using the same parts and specifications. This is the most popular type of 1911 sold and built in the U.S. Pictured to the left is its 80% counterpart.

The full-size 1911 carries 7+1 rounds and is considered a tank by most shooters. It weighs in at a whopping 40 ounces when empty (2.5 pounds), and measures 8.25" in overall length. All that size and weight is considered an advantage: The Government model is sufficiently accurate to 100 meters and potentially beyond, and it absorbs recoil efficiently.

The Commander 1911 was introduced by Colt in 1950 as a service pistol for - you guessed it - U.S. Military officers. The Commander sports a slightly smaller frame that is made of steel or lightweight aluminum. It's frame and barrel are slightly shorter (4.25") and with configurations available in 9mm, .38 Super, and .45 ACP. The Commander is the product of the U.S. government favoring a lighter, smaller replacement for the Government shooter. The new Commander had to weigh less than 26 ounces (1.65 pounds), so it ditched the steel frame.

The Commander's smaller length (7.5" total) and lighter weight make it a popular carry piece among shooters. Sacrificing just 0.75" of barrel length, the Commander yields plenty of accuracy under 100 meters. Because vertical length is the same, the Commander also sports a 7+1 capacity. The Commander and Government 1911 models share mostly the same parts save for the barrel, barrel lug, and slide. Some shooters have found guide rods and recoil springs are interchangeable on certain models.

The Officer 1911 is a departure from the original design. These super-compact shooters have new parts and revised dimensions to accommodate the 1911's functionality and calibers. The frame on an Officer 1911 is vertically shorter and has a lower magazine capacity of 6+1. Most Officer frames measure 3.5", with variations ranging from 3" to 4". Most parts on an Officer 1911 can not be swapped out with a Commander or Government model. Sporting a steel frame, most Officer models weigh 28 ounces empty and measure 7" in total length.

To make the Officer work, the barrel had to ditch a traditional barrel bushing. To accommodate the shorter slide, the barrel is also belled and contacts the slide itself. One locking lug is removed to allow the barrel to recoil back more toward the rear of the frame, to allow rounds to cycle reliably with the shorter slide rails.