Finished cutting and drilling your  80% lower receiver? Congratulations! You're now the proud owner of an AR-15 (well, legally). It doesn't look like much yet, and that's because you still need to assemble the thing. We're going to show you how with easy-to-follow written and picture instructions! No experience is required.

Time required: You'll need about an hour (60 minutes) to complete this install. There's also an important set of tools that are required or recommended: 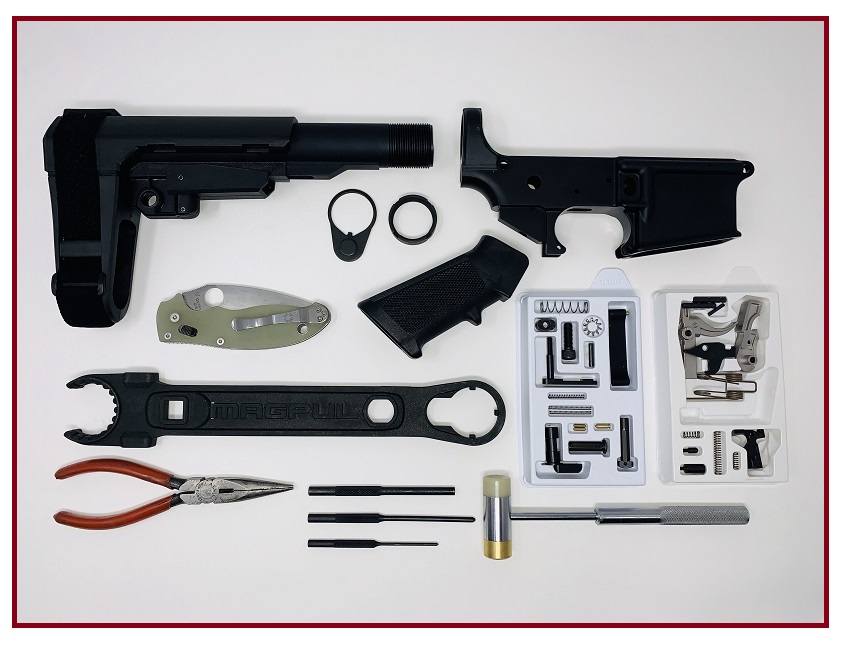 Before Starting, Verify Your Parts

You don't want to be half-way through your install only to find you're missing a spring, detent, or roll pin. Check the provided parts kit diagram below to verify that you have the required parts for the AR-15 lower assembly. This diagram comes directly from the Anderson Stainless kit: 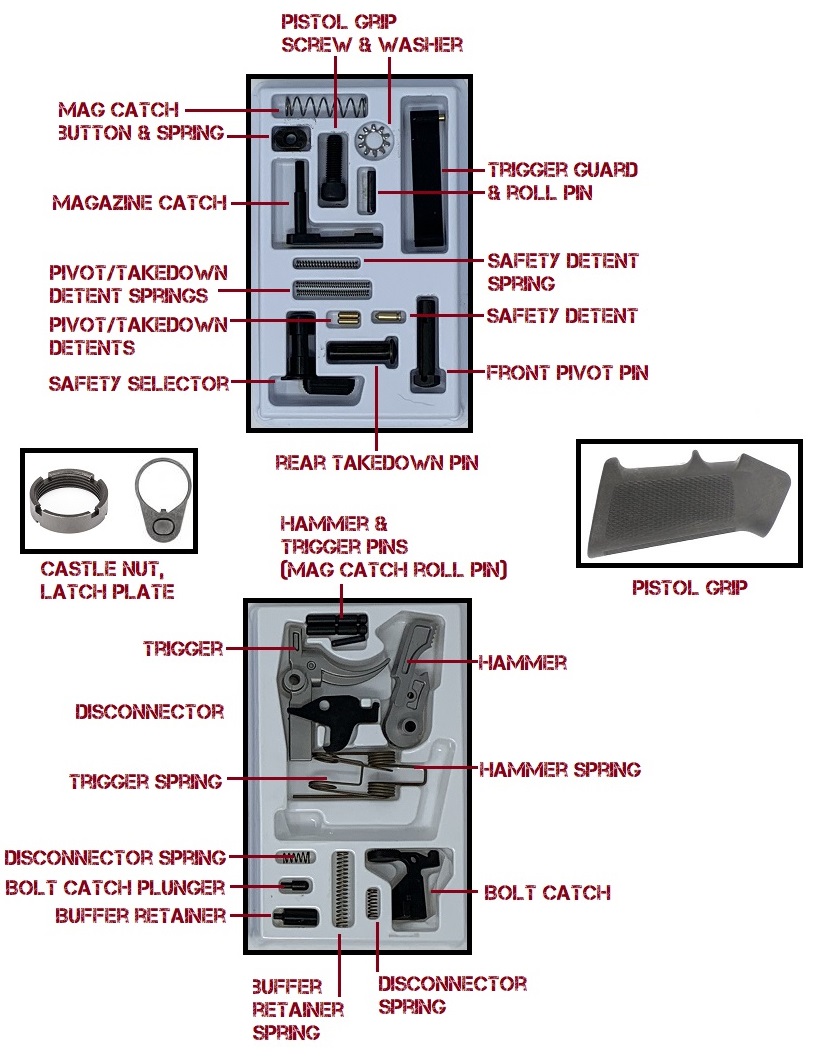 Install the trigger spring onto the trigger, so the loop connecting both sides of the trigger rests underneath the sear (front shelf above the trigger lever), with the tabs facing forward.

Insert the fatter end of the disconnector spring into the small hole on top of the trigger. It helps to use the 3/32" to gently press the spring in place, as it can be a tight fit. Lubricant also helps.

Grab your hammer spring and install it onto the hammer. Ensure the loop connecting both sides of the spring is positioned underneath the hammer hook. The ends of the spring should point in the direction of the hammer's strike face.

The hammer spring is much stiffer than the trigger spring, so additional pressure is required to align the holes. With the holes aligned, repeat the pin installation process by lubricating the hole and tapping the pin into place until it's flush on both sides of the receiver. Again, place the grooved end of the pin into the hole from the left side.

You can now perform a function check of the trigger and hammer.

Cock the hammer by pressing it down into the receiver. The sear on the trigger should catch the bottom of the hammer. Next place a finger on the hammer's strike face to prevent it from slamming into the magazine well when release.

Next up, the trigger guard latch. If you bought a billet 80% lower or your receiver has the trigger guard integrated into the receiver as a single piece, you can obviously skip this step. Otherwise, simply depress the spring-loaded detent that's already installed, and press the latch into the holed ears behind the magazine well. Lubricating the ears and latch helps reduce friction between the anodized surfaces.

Next is the first roll pin install. For this, you'll need the 3/32" punch and gunsmithing hammer. The ears that hold the pin and latch in place can break here, so it's helpful to support the bottom ear with a small piece of wood or rubber. The rubber handle on our pliers provided the perfect height. Grab the longer roll pin in your parts kit and lubricate the holes on the latch and ears. Align the pin, seat the punch atop it, and gently tap the pin into place. If you meet excess resistance, stop and double-check that all the holes are aligned. Once hammered into place, the pin should be just slightly recessed on both sides.

The magazine catch should be inserted into the hole and channel on the left side of the receiver. You'll need to install the button and spring on the right side. To stop the catch from falling out, you can rest a small wood pencil (or the 3/32" punch handle) against it on the table.

Now, grab the receiver firmly and use your index finger to press the button in as far as possible. This will push the mag catch back out. Rotate the mag catch clockwise three to four times, align it with the channel, and release the button. The button should be just barely recessed into the receiver. The magazine catch is now fully installed.

You can perform a function check of the magazine catch/release with an empty magazine.

The bolt catch is the hardest part of the install, thanks to the roll pin. Be sure to tape up the receiver to prevent scratching it. Next, grab the bolt catch spring and plunger and insert the spring, followed by the plunger ontop of it, into the recess for the bolt catch.

Once partially seated, insert the bolt catch, ensure it's aligned with the holes on the ears, and continue tapping the roll pin until it's flush, just barely recessed on both sides.

First, insert the takedown pin detent spring into the small hole on the outside of the right pivot pin hole.

Next, carefully slide the detent into the hole atop the spring. The detent has a very high chance of shooting back out, never to be found again. To prevent this, grab a thin blade to help hold the detent in the hole.

Next up comes a two-for-one: You'll be installing the safety lever and pistol grip together. First, lubricate the receiver's safety lever hole and insert the safety lever fully from the left side. There may be some resistance; simply wiggle the lever to help get it seated.

Next, press the pistol grip onto its mounting point and ensure the detent spring aligns with the safety lever detent. Check inside the pistol grip to verify its hole is aligned with the threaded hole in the bottom of the receiver.

Grab the pistol grip's Allen-head bolt and washer, press the bolt onto your Allen key or socket, and thread the bolt into the receiver. Be careful not to over-tighten, or you could crack the receiver. Not much force is required, as the washer will keep the pistol grip bolt from loosening when firing your rifle or pistol.

Grab the rear take-down pin's spring and detent. First insert the detent into the small hole at the rear of the receiver, below the buffer tube's threaded housing.

Next, throw the buffer retainer atop its spring inside the tube's housing and compress the retainer with a large punch.

To ensure the castle nut does not come loose during firing, it needs to be tightened with an Armorer's Wrench. You may need to remove your buttstock or pistol brace to slide the wrench onto the nut. Most buttstocks and braces are removed by pulling down on the adjustment lever, unseating the locking pin inside. Tightening the castle nut past hand-tight by one-quarter turn is sufficient. The castle nut can also be staked in similar fashion to the bolts on your bolt carrier group's gas key if you're worried about the nut loosening, though this is not typically required.

Your Lower Receiver Assembly is Complete

With the castle nut tightened, reinstall your buttstock or brace if necessary. Your lower receiver assembly is complete. If you've discovered issues with your trigger assembly failing to reset during initial use, consult the troubleshooting guide below.

You may experience various issues with your trigger or hammer with a newly-assembled AR-15 lower receiver. This is not uncommon, so don't worry too much. Below are some of the common issues:

Fault #1 is most common, though all of the above issues can typically be fixed by addressing all the possible issues and fixes below. 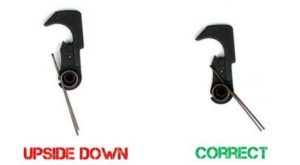 WARNING: Over-polishing or de-burring either contact point too much can cause the hammer hook and disconnector to fail to connect at all, ruining your trigger assembly. Only lightly polish both units and continue testing your rifle or pistol until reliability is achieved.

Inversely, your hammer hook-to-disconnector tolerance may be incorrect. With the hammer cocked by the trigger sear, the distance between the hammer hook and ddisconnector should be 0.003". You can verify the tolerance without measuring by simply releasing the hammer and pressing it down to check if the disconnector captures the hammer. If it does not, your tolerance is likely too great.

5. De-bur and polish the trigger and hammer pins.

If any of the above issues remain, or if your trigger or hammer feel gritty or resist moving freely when not captured, you may need to de-bur and polish the hammer and trigger pins. You can remove them, lubricate them, and gently polish them with steel wool.

WARNING: Over-polishing or de-burring the pins too much can cause them to easily "walk out", or fall out of the receiver assembly during firing. Only use fine steel wool and only gently polish/de-bur the pins. Reinsert the pins and test-fire your rifle or pistol to verify reliability and only continue polishing if either the hammer or trigger feel obviously gritty or get stuck during movement.