The AR-15 requires just the right amount of weight in its recoil buffer to operate reliably. This guide covers the AR platform's various buffers' weights, types of buffers, buffer tube diameters and comparing mil-spec to commercial tubes, and more.

The AR-15's buffer system consists of 6 individual parts and sets of components. Together, the buffer system performs a few important tasks:

The buffer system is part of the lower assembly, and it requires some components of the lower parts kit to install. Let's cover each part of the system in detail, starting with the literal core of the thing.

Casing. The casing holds spacers and weights. When the bolt carrier rams backward, it drives the rear of the buffer into the end of the buffer tube. To prevent the tube or buffer from cracking, a rubber bump-stop is installed. The bump-stop caps the buffer and keeps the weights and spacers inside via a small pin.

Weights. Buffer weights are made from steel and tungsten. We'll cover the various combinations of weights that are used to provide certain total weights for certain gas systems, calibers, and setups.

Spacers. The spacers insulate the weights from one another, preventing them from cracking or chipping. The spacers are typically made from rubber or plastic like the bump-stop.

The carbine buffer is the default weight used for all AR-15s chambered in 5.56 NATO and .223 Remington. It's also the standard for most 300 Blackout builds that shoot supersonic, subsonic, or a mixture of both. The carbine buffer uses three steel weights.

The Heavy buffer is designed to reduce felt recoil and dial in brass ejection angles in AR-15s chambered in 5.56 and .223 and equipped with Carbine-length gas systems. It's also popular in .308 ARs. It doesn't reduce reliability and it may make for a more pleasant shooting experience. The "H" buffer is favored among shooter who typically shoot heavy match-grade loads. The H buffer uses two steel weights and one tungsten weight.

The H2 buffer can be used to further reduce felt recoil in .308, 5.56, and .223 guns. Depending on the gas port diameter of your barrel, an H2 buffer might provide too much resistance against the bolt carrier, resulting in short strokes and failures to eject or feed. Conversely, the H2 buffer works wonders for rifles that feel over-gassed even with an H buffer. The H2 is also sometimes used in 300 Blackout pistols that are over-gassed when firing supersonic loads. The H2 uses two tungsten weights and one steel weight.

The H3 buffer is used exclusively for .30-cal and blowback pistol cartridge (AR9) builds. It was originally developed to help control the cyclic rate and felt recoil in short-barreled machineguns. If you use an H3 buffer for an AR9, you'll need to invest in spacers for the buffer tube. The AR9's bolt carrier is shorter than normal and overtravels if not spaced correctly. If you're lucky enough to own a full-auto AR, an H3 buffer might be required to get your gun running smoothly. The H3 uses three tungsten weights.

The HSS is a tungsten-casing buffer that can be tuned for specialty builds. It's often used in blowback-operated pistol builds and high-powered .30-cal builds. The HSS buffer can be modified with custom weights to dial in the gun in question.

The XH buffer is reserved for special builds, too. ARs firing custom .50-caliber cartridges like Beowulf require a buffer like this to handle the uncommonly high amount of energy produced in the gas system.

The Rifle buffer looks strange compared to most modern ARs' buffers, but this is the original design used in the AR-10 before the AR-15 was developed decades ago. It's physically longer and only works with the AR's old fixed stock, found mostly on M16s of the Vietnam era. You'll need one of these if you plan on building a retro M16 clone that uses the A2 stock.

The buffer tube houses the buffer and recoil spring. It threads to the lower receiver and aligns with the bolt carrier in the upper receiver. The buffer tube also hosts your buttstock or pistol brace to provide a stable shooting position. To ensure it can withstand the energy transferred by the spring and bolt, the buffer tube is made from the same billet or forged aluminum as the AR's receivers.

Buffer tubes are either commercial or mil-spec. Tubes for most AR-15s are called "Carbine-length" but some are physically longer to reduce felt recoil. These longer tubes are used for .30-caliber rifles.

The mil-spec carbine tube is the standard tube for almost all AR-15s. It's used on virtually every caliber type of rifle and pistol. It measures 7.125" long with 1.185"-diameter threads. The mil-spec tube is forged from 7075-T6 aluminum. This tube must be paired with a forged lower receiver. The outer diameter at the buttstock end is 1.14".

The commercial carbine tube is made from billet (6061-T6) aluminum and functions just like a mil-spec tube. It is physically smaller in diameter (1.170" threads), so it cannot fit in a forged receiver. It must be paired with a billet receiver. It still measures 7.125" long and has a diameter of 1.17" at the buttstock end.

True mil-spec goes out the window when it comes to AR-10 or .308 buffer tubes. They're all made from billet aluminum yet are advertised as "mil-spec" and share the same threads as a mil-spec receiver. They measure 5/8" longer than a carbine tube. All you need to know is the modern .308 tube is exclusively compatible with the LR-308 receiver from DPMS, which is the only modern .308 AR lower on the market.

The original M16 buffer tube rests inside the fixed stock. It isn't exposed like the modern AR-15 and AR-10 tubes, and is physically longer than either of the two. Only a rifle buffer and original M16 stock can be used with this tube.

Resting inside the buffer tube, the recoil spring gets compressed by the buffer and bolt carrier before using that stored energy to drive both units forward. All AR-type rifles and pistols use the same recoil spring regardless of barrel length, type of buffer, type of cartridge, and whether the weapon is even firing a gas-operated rifle cartridge like 5.56 or 300 BLK, or blowback-operated handgun cartridge like 9mm or .45 ACP. It doesn't get any simpler than this.

There are aftermarket buffers available which combine the casing and weights with a metal guide rod and different spring. The rod captures the spring. This allows for a physically skinnier, stiffer, and much quieter spring to be used. Silent-captured buffer springs reduce that twangy sound created in the buffer tube when firing an AR-15. They transfer less energy through the tube and stock to the shooter's cheek. Most importantly, they significantly reduce felt recoil.

A buttstock or pistol brace is not required for the AR-15 to operate. Many AR pistols are found with only the buffer tube exposed, sometimes with only some foam padding covering it. Either way, a stock or brace can attach to the buffer tube to provide a more stable and comfortable shooting position. Most stocks and braces have a channel with a spring-loaded lever with a locking pin installed to align the unit on the tube and set it at a certain distance from the receivers. Other units may simply slide over the tube and tighten via set screws with an Allen-head wrench. 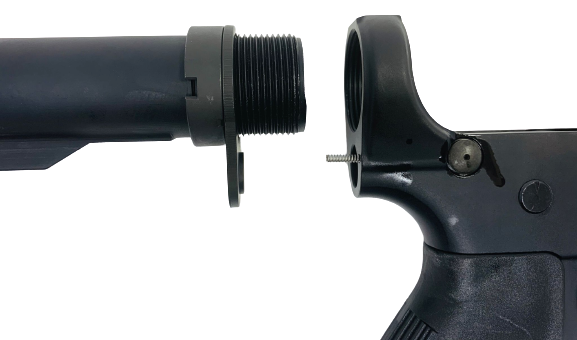 The latch plate orients the buffer tube with the upper and lower receivers, preventing it from rotating once tightened. This ensures the tube doesn't come loose while shooting but more importantly, it ensures the buttstock or pistol brace is aligned with the receivers and barrel. The castle nut tightens the buffer tube and locks the latch plate's position to the lower receiver, thus locking the position of the tube itself. The latch plate is also responsible for securing the detent and detent spring for the safety selector lever, shown above.

NOTE: Castle nut threads must also match the threads on your mil-spec or commercial tube. 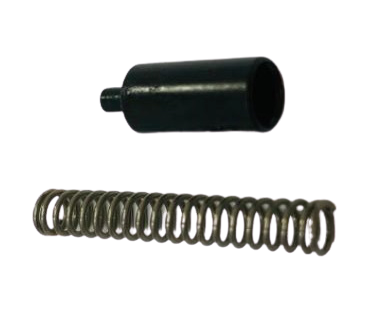 The recoil spring and buffer are always under tension, even when the bolt carrier is in battery. This small plunger-style retainer prevents the buffer and spring from shooting out of the tube when the upper and lower receivers are separated.The buffer itself keeps the retainer held inside the lower receiver. To remove the buffer, the retainer needs to be depressed.

NOTE: The buffer retainer is universal for all tubes, buffers, and AR platforms. It is typically included with the lower parts kit and not a buffer kit.

Q: What is the best buffer weight for an AR9?

A: 5.4 ounces. This has been confirmed by shooters with feedback provided on reliability and recoil.

A: Yes. You will need a spacer for the buffer tube. It must measure 0.76" to 0.875" to accommodate the shorter length of the AR9's bolt carrier.

Q: What's the best buffer weight for a 300 Blackout build?

A: The 300 Blackout cartridge uses the AR-15's 3.0-ounce (Carbine) buffer for supersonic and subsonic ammo.