The AR9 is the perfect pistol-caliber variant of the AR-15. Let's cover how to build one. First, frequent questions. Then let's go over parts and ballistics. We'll review the AR9 and those 9mm box conversion kits, too.

The AR9 is a "PCC," or pistol-caliber carbine that is mostly configured as a pistol instead of a rifle. That's how  this 4" pistol kit above appears, but we'll get into parts and setup later. The AR9 a modified AR-15 that uses a new type of lower receiver. This new receiver accepts 9mm Glock magazines and is re-tooled to work with a blowback-operated bolt carrier group instead of a gas-driven BCG.

If you're already familiar with building a regular 5.56/.223 AR-15, then you've covered most of the AR9. That's because the 9mm variant  uses most of the AR-15's original parts:

Even though the AR9 uses a different bolt carrier and barrel than the AR-15, the stripped upper receiver is the same for both platforms. The 9mm bolt carrier has the same diameter as the 5.56/.223 BCG, so it fits in the original receiver without modification. The exterior diameter of the 9mm barrel is the same, so the barrel nut and threads match for both cartridges, too. Most 9mm bolts do not have serrations cut into the right side of the carrier, so they can't make use of the AR's forward assist. Many AR9's are built using a "slick-side" upper with no assist. 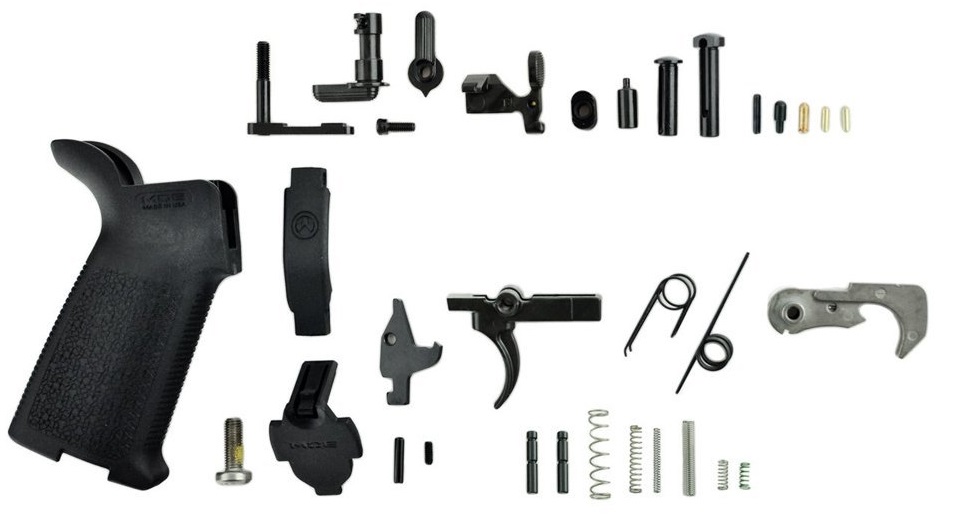 Even though the AR9's lower receiver is physically different in size and shape than the AR-15's receiver, it uses the same trigger, safety, hammer, disconnector, springs, takedown pins, and pistol grip. All pieces in the lower parts kit are interchangeable between the two.

The AR9 can use a custom buffer tube, or it can use the same tube as the AR-15. The 9mm bolt carrier is shorter than the rifle bolt carrier, so a spacer measuring about 0.76" to 0.875" should be used with the AR-15 tube. The original recoil spring is used, too. The same type of buffer is used but with different weights. More on that later.

Since the same diameter tube is used on the AR9, it can also use a standard (mil-spec) buttstock or pistol brace. Most AR9s are configured as pistols (a weapon having a barrel shorter than 16") so it can't have a buttstock or it'd be considered an SBR.  This guide covers the ATF's stance on shouldering a pistol brace.

Let's get into the important stuff: What's different between the AR9 and AR-15, and what configuration is best for an all-around reliable and accurate 9mm pistol? We'll cover physical differences in materials and specs, and go over ballistics and accuracy with barrels.

The 9mm cartridge obviously requires a different barrel than a centerfire rifle cartridge. The diameter and shape of the barrel extension is the same as 5.56/.223 barrels, so the 9mm barrel installs without any special parts required for the upper receiver. The barrel nut also gets torqued to the same specs, around 40 to 50 pound-feet.

Choosing an appropriate barrel length for your AR9 can seem overwhelming, since so many 9mm cartridges exist. The pros at Ballistics By The Inch compiled some excellent ballistic data for the 9mm cartridge, and it'll help us pick an optimal barrel length. Comparing Cor Bon, Federal, and Speer ammo, we get the following velocities compared to barrels measuring 2" to 18". 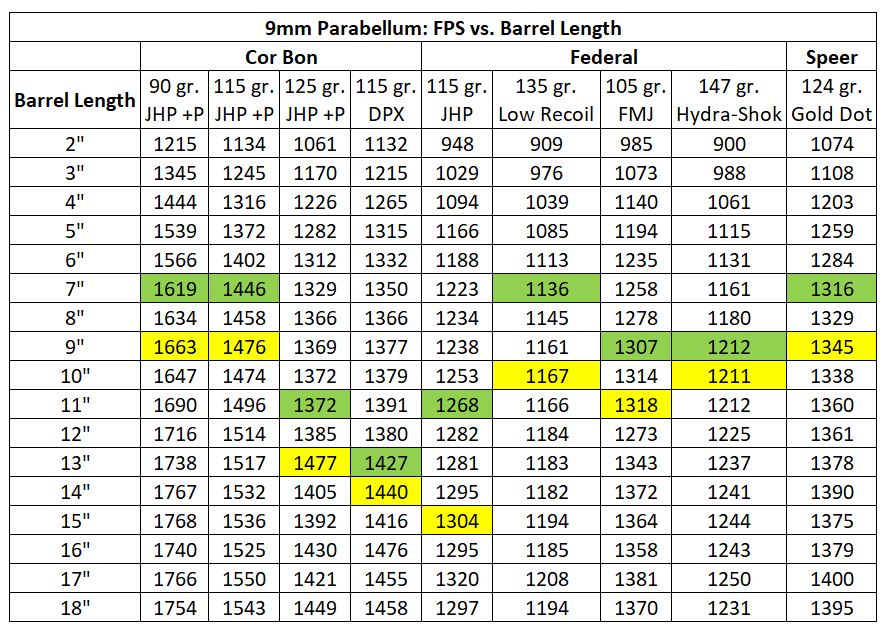 What is the best barrel length for my AR9?

If we take the green velocities for all nine cartridges in the chart and average out their optimal barrel lengths, we get a perfect average of 9.0". This figure agrees with what most shooters find: 9mm burns its powder quickly and achieves optimal velocity below 10". Few rounds require more than 9" of barrel length to achieve any noticeable gain in velocity and thus accuracy. If you want to shoot primarily suppressed 9mm rounds, a 4" barrel is required to keep most loads in the 124-grain weight range below supersonic (1,125 FPS) velocities.

Endless ballistic data and decades of major manufacturers producing handguns, revolvers, and submachines have helped us figure out that 9mm requires a 1:10 twist rate to be most effective for most loads. It really is that simple, 1:10 reigns supreme and it's the twist rate you want for your AR9.

The AR9's bolt is unlike the AR-15's bolt in a few ways: It's physically shorter, it has no gas key, it does not operate with a delayed roller, and it does not have a bolt separate from the carrier. Instead, the carrier is the bolt itself. It still uses the AR-15's firing pin, but this is where similarities end. 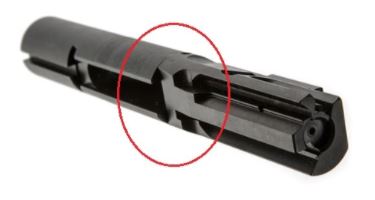 To work with the AR-15's lower parts kit, the 9mm AR bolt must be ramped on the underside. This slope provides clearance necessary for the hammer and trigger to reset. 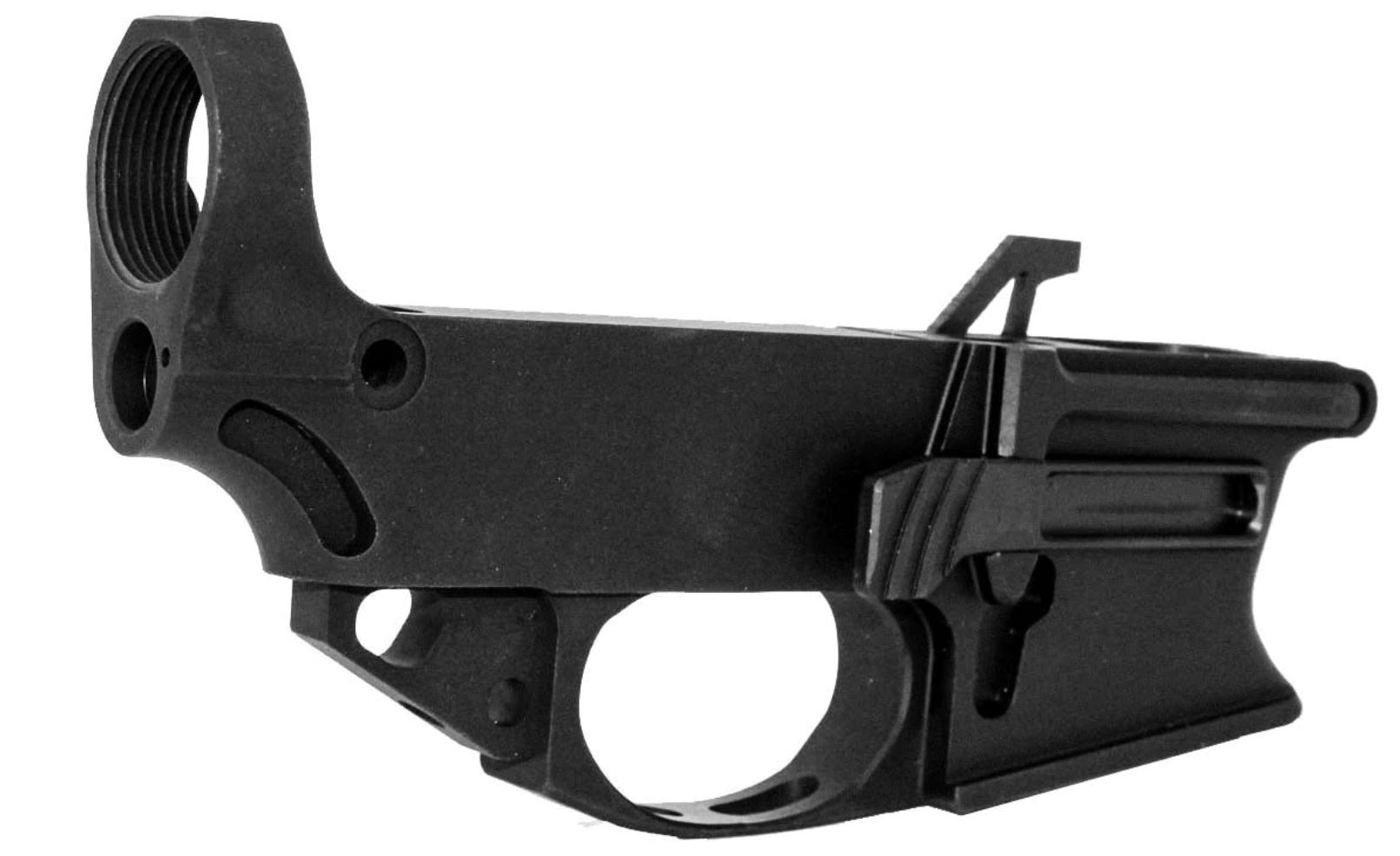 The AR9's lower is the biggest differentiator in this comparison. A billet 80% version is shown for this example. It uses the same dimensions as the AR-15 for its takedown and pivot pins, and for the placement of the parts kit's components. Besides that, the AR9 receiver is different from the AR-15's. It uses a modified ejector bolted to the receiver behind the magazine well, replacing the bolt-mounted extractor on the 5.56/.223 BCG. It also uses a modified magazine catch and release that comes preinstalled, made to work with all 9mm Glock magazines. AR9 receivers are usually made from billet (6061-T6) since most OEM manufacturers haven't made machines capable of forging this receiver from aluminum. Although billet, the AR9 lower uses mil-spec threads to ensure it works with regular buffer tubes. 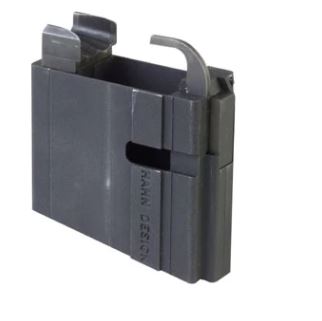 An AR9 (of sorts) could be built long before the dedicated 9mm lower receiver was developed for the black rifle platform. The box conversion was -- and to some, still is -- a relatively affordable way to convert an existing 5.56/.223/300 Blackout-chambered AR-15 into a 9mm shooter. The box conversion rests inside the original magazine well, allowing it to accept a 9mm magazine, usually Glock or Colt. The upper receiver remains, but the barrel and extension are swapped out with the bolt and buffer.

9mm box conversions are usually $40 to $70 more affordable than a dedicated 9mm lower, but you'll still need to buy all the other parts required to make your gun function. That includes a new bolt and bolt carrier, buffer, and barrel. Some shooters say box conversions can be unreliable or finicky. The conversion kit can loosen while firing and the ejector and feed ramps are attached to the unit, not the receiver. Many simply don't like the appearance of a skinny 9mm magazine poking out from the AR's massive mag well, and a dedicated lower remedies this issue.

Blowback cartridges like 9mm produce way more energy than a centerfire rifle cartridge. For the AR platform, that means ditching the gas system altogether. More importantly, that also means investing in a much heavier buffer so your new pistol doesn't wind up with a broken bolt carrier or cracked buffer tube. A 5.0- to 5.4-oz buffer is ideal. This is nearly twice the weight of a 5.56/.223 buffer (3.0 ounces).

Now you're armed with the knowledge you need to build a reliable AR9 pistol! Full build kits can be purchased with all parts required, or you can piece together your new 9mm AR using an existing gun and new components. Here's a recap of the most important points to remember:

Ready to start building? This instructional how-to guide shows you how to fabricate the billet 80% lower for this build.

DISCLAIMER: If you are new to the world of DIY gun building, you likely have a lot of questions and rightfully so. It’s an area that has a lot of questions that, without the correct answers, could have some serious implications. At 80lowerjig.com, we are by no means providing this content on our website to serve as legal advice or legal counsel. We encourage each and every builder to perform their own research around their respective State laws as well as educating themselves on the Federal laws. When performing your own research, please be sure that you are getting your information from a reliable source.

We are a national retailer of individual components and not all products depicted on this website are legal in every state. Shipping of various products found on this website are prohibited to some states (such as California, Connecticut, District of Columbia, Hawaii, New Jersey, New York, Rhode Island, and Washington). The information, pictures, text or products presented on this website are not a representation by us, and should not be understood by you, that any product or completed firearm is legal to assemble or own in your state of residence. We encourage each and every builder to perform their own research about the state and federal laws that apply to them. It is your responsibility to understand the law and we encourage you to consult with an attorney or your local ATF representative.