The White House issued a Press Release before the 2:15 PM ET announcement today about ATF Rule 2021-05. The Final Rule Can Be Found Here. We are currently analyzing the differences between this final rule and the previously proposed rule. Stay tuned...

Press is reporting that there will be an announcement from the White House regarding the ATF Rule 2021-05 on Monday, April 11th at 2:15 PM ET.

This would allow the ATF to expand its nearly billion-record gun registry as well as regulate gun parts as firearms. 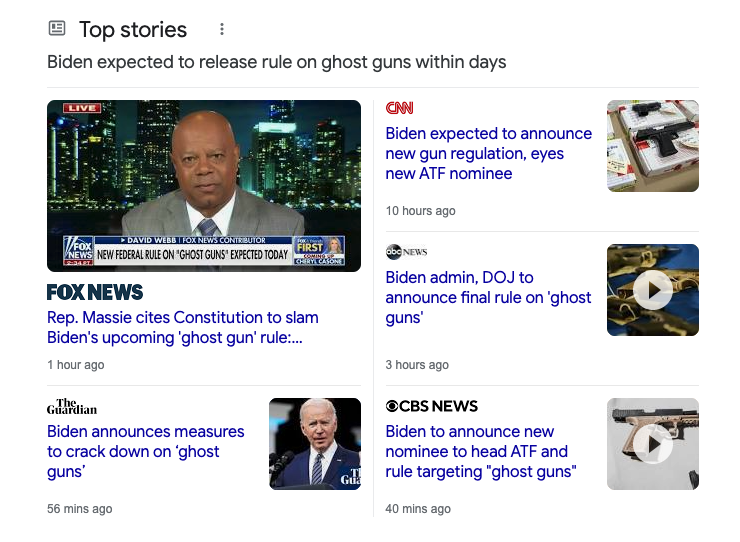 Thanks to organizations like Firearms Policy Coalition and Gun Owners of America, you can start taking action immediately to encourage our Congress to eliminate ATF's illegal gun registry and repeal the ATF rule under the Congressional Review Act.

On March 4, 2022 the NY Times reported that the rule would be finalized in early April and would go into effect 60 days later.

"But two White House officials, speaking on the condition of anonymity because they were not authorized to publicly discuss the matter, said Mr. Richardson had misspoken and that the rule would, in fact, be finished by early April. They said that another claim by Mr. Richardson, that enforcement of the regulation would begin 90 days after the rule was completed, was also off base, and that the gap would be closer to 60 days.

The ghost gun rule is moving faster than most federal regulations." 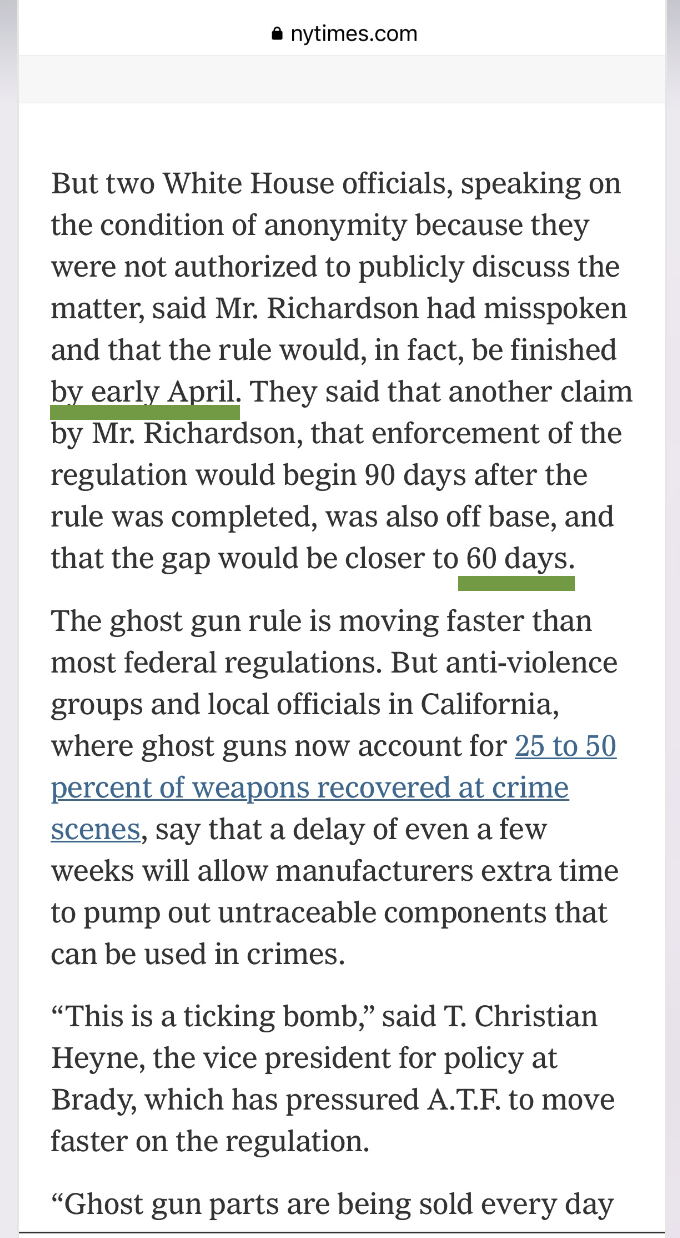 The ATF released their proposed rule regarding 80 lowers / ghost guns in May of 2021.

There was an update on January 31, 2022 in the Federal Register Vol. 87 No. 20 that provided more clarity on when a final rule would go in place. 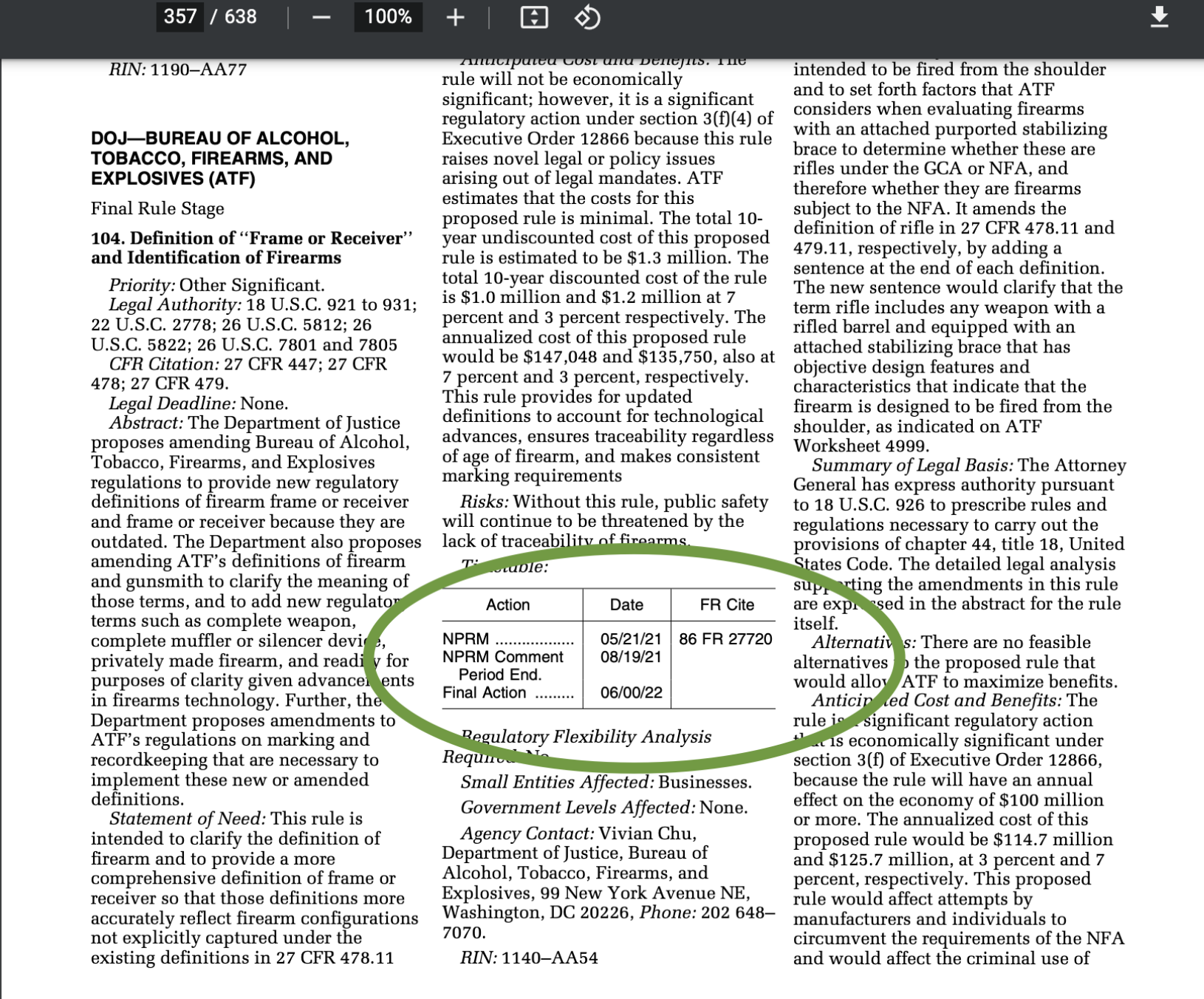 This new rule redefines the terms "receiver" and "frame". By doing this, they are changing the longstanding definition of a firearm.

This will severely infringe upon the rights of law abiding citizens. It is an attack on firearm owners, builders and dealers. This new ruling will leave honest people with one less method for self-defense.

In this proposed rule, the definition of what constitutes a “firearm” is rewritten so that practically every component of every gun is now legally a firearm!

Watch this informative video from the Gun Owners of America that explains how: https://www.youtube.com/watch?v=CHhcOki1OnE


We've been working around the clock (24/7) to provide you with quick shipping for ALL of the products we carry!

We are only selling what we have in stock so that you aren't waiting months for your order.

We are still restocking ALL of the products in our catalog. Please sign up for in stock notifications for items that you don't see in stock but are wanting.

We keep expanding the warehouse space and continue to add more members to the team to get your orders out faster!

Currently all orders are shipping the NEXT BUSINESS DAY!

DISCLAIMER: If you are new to the world of DIY gun building, you likely have a lot of questions and rightfully so. It’s an area that has a lot of questions that, without the correct answers, could have some serious implications. At 80lowerjig.com, we are by no means providing this content on our website to serve as legal advice or legal counsel. We encourage each and every builder to perform their own research around their respective State laws as well as educating themselves on the Federal laws. When performing your own research, please be sure that you are getting your information from a reliable source.

We are a national retailer of individual components and not all products depicted on this website are legal in every state. Shipping of various products found on this website are prohibited to some states (such as California, Connecticut, District of Columbia, Hawaii, New Jersey, New York, Rhode Island, and Washington). The information, pictures, text or products presented on this website are not a representation by us, and should not be understood by you, that any product or completed firearm is legal to assemble or own in your state of residence. We encourage each and every builder to perform their own research about the state and federal laws that apply to them. It is your responsibility to understand the law and we encourage you to consult with an attorney or your local ATF representative.