Bomb-proof forged receivers. Sexy, aesthetic billet lowers. Ultra-light, stripped units made from weapons-grade polymer (and some cast options that may be dangerous): Today, we're breaking down how AR-15 and 80% lower receivers are made, what materials are used, and the pros and cons of each type. We'll also compare and contrast 6061 T6 billet and 7075 T6 forged aluminum, what elements they contain, and how they perform in an AR-15. With this guide, you'll know exactly what type of receiver you want to pick out for your first (or next) black rifle or pistol build.

How the Extrusion Process Works

This "extrusion" process simply refers to shaping the raw aluminum into a machinable shape by through forcing it through a series of high-pressure machine rollers. Below is a visual example of the billet aluminum extrusion process:

First, the raw bar stock is heated and rolled into an extrusion chamber. At one end of the chamber is the extrusion press. This large, hydraulic press forces the bar stock through a shaped metal die, giving the extruded billet its rough receiver shape. As the metal is extruded, it cools and re-shapes. This process hardens the metal and aligns its crystalline structure, creating a uniformed and incredibly tough receiver.

The roughly-shaped receiver can then be CNC-machined (pictured above) to form the magazine well, buffer tube housing, pin holes and threaded fittings.. CNC machines can operate at tolerances as little as 1-millionth of an inch and they're capable of cutting through large swathes of metal with perfect results. Because of their precision, billet receivers are the easiest to assemble and they're usually the most reliable "out of the box", without any modification.

This allows billet receivers and 80% lowers to feature unique shapes and aesthetic designs, like integrated trigger guards, custom magazine wells, and unique engravings or markings. More importantly, billet lowers can benefit from added functionality: Some units ( like the lower pictured above) are finished with threaded holes for the trigger and parts kit. This eliminates the need for roll pins and punches.

Why Build with a Billet Receiver

Billet receivers tend to have thicker walls which makes for a stiffer unit. This allows a billet lower to resist higher pressures, accommodate more weight on the barrel, and resist higher recoil forces. A billet receiver is optimal for long, heavy AR configurations like a .308- or 6.5-caliber rifle.

A forged unit is the toughest and most affordable type of receiver you can buy. Forged receivers are made from a slightly different aluminum alloy, called 7075 T6 aluminum. Forged receivers are formed under immense heat and pressure to achieve their final shape. First, a large piece of 7075 T6 aluminum bar stock is formed from raw aluminum and other metals, using large hammer presses (pictured above).

Next, the rough bar stock is shaped into a receiver using even more hammer presses and heat. This process purifies the metal alloy by removing waste material called "slag". As slag is removed (illustrated above as sparks flying off the bar stock) and the metal is pounded into shape, its crystalline structure organizes, locking the metals within the alloy in a consistent molecular position.

Once forged, the receiver is then CNC-machined to shape the magazine well, bolt catch and magazine catch and release, buffer tube housing, and other parts. Because forged receivers require less machining - and because forging is the most cost-effective manufacturing process - these are the most affordable type of receiver you can buy.

All this scientific gobbledygook means your forged receiver is incredibly dense, hard, and solid - more so than a billet receiver or any other type of lower. Because of their strength, only forged receivers are considered "mil-spec". The U.S. Military's service rifles are all built using forged upper and lower receivers.

Why Build with a Forged Receiver

Forged receivers boast higher tensile strength and can accommodate much higher internal pressures generated inside the chamber as a round is fired. Because of this, forged receivers should be used on rifles that will see a lot of rapid-fire. You should also consider a forged receiver if you intend to build an M4 or M16 clone. 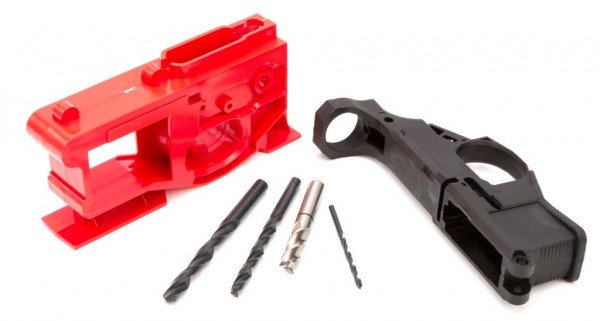 Polymer receivers are relatively new to the tactical rifle and pistol market. Polymer handguns and sub-machineguns (like the Glock and Beretta PMX) have been around for some time, but it wasn't until recently that polymer receivers have proven capable of handling the high pressures and stress of a supersonic rifle round.

Polymer receivers don't require any advanced tooling to be made, like industrial-grade CNC machines, extrusion equipment, or forges. To form its initial shape, molten plastic granules are mixed with nylon fibers to create a weapons-grade polymer. This polymer is poured into a receiver mold. Once set and cooled, the roughly formed receiver is removed and its final fittings and features are cut and drilled.

Polymer receivers are  incredibly lightweight - most weigh half that of a billet or forged receiver. Because of their construction, polymer 80% lowers are also the easiest to complete at home. The polymer receiver includes its own jig and no big power tools are required. One can even complete the fire control cavity using a simple drill press. Cutting the fire control cavity in a forged or billet receiver using a drill press can be dangerous if plunge cuts aren't used. That rule doesn't apply to the softer, malleable polymer.

Why Build with a Polymer Unit

Shooters who want the lightest possible AR-15 should consider a polymer receiver for its featherweight functionality. Numerous shooters have completed their builds with a polymer unit and have reported perfect functionality, accuracy, and reliability.

Cast receivers are somewhat of a "black sheep" in the AR world. While cast metal tools and equipment have long been manufactured safely, the same cannot be said of a cast firearm receiver (or any other load- or pressure-bearing firearm component). Cast receivers are made from raw aluminum, but not through rolling bar stock or forging raw metal, which gives the receiver its consistency and strength.

How a Cast Receiver is Made

A cast receiver is made by simply heating and pouring molten aluminum into a shaped mold, like a polymer receiver. Except unlike polymer (which only needs to be heated slightly and naturally forms a strong molecular structure when poured), cast aluminum receivers can suffer microscopic defects as they cool and take shape.

These defects can quickly amplify under pressure or load, like when firing a round. Microscopic defects can turn into larger cavities, fissures, or cracks in the receiver. They may not be visible to the naked eye, but they're there. All it takes is one round to blow the receiver wall out near the chamber, and you could end up with a catastrophic injury or even be killed.

We do not write this lightly. This has happened to shooters in the past. We strongly recommend against building your black rifle or pistol with any cast receiver.

Both these aluminum alloys are commonly used to build most AR-15 and firearm receivers. At first glance, either metal will appear largely the same. But each alloy contains a specific combination of different elements and metals. Both contain magnesium, silicon, copper, iron, zinc, titanium, manganese, and chromium. The difference between these two alloys rests in how much of each element is present in the alloy.

This chemical composition chart breaks down the percentage of each element contained within 6061 aluminum. The major alloying components in 6061 - magnesium and silicon - are what give the alloy its incredible strength once fabricated. Magnesium provides a foundation for the strong, crystalline structure in the metal, and silicon reduces the melting temperature of the bar stock, ensuring it is uniformly rolled and extruded while being heated.

In 7075 aluminum's chemical composition, we see much lower amounts of pure aluminum. In fact, a forged receiver is made up of much more chromium and manganese. Chromium is one of the hardest metallic elements on earth, with a high Brinell Hardness rating. It is often added to a gun's chamber and rifling to harden those surfaces, bolstering performance during rapid-fire and increasing overall barrel life.

High amounts of chromium and manganese provide those same benefits in a forged receiver. 7075 aluminum contains less silicon because the forging process shapes the receiver more easily than during extrusion. This also naturally increases the hardness of the alloy.

These alloys' T6 designations refer to a heat-treating and tempering process. Tempering 6000 and 7000 series aluminum results in (you guessed it) greater strength and hardness. Exactly what's necessary for handling rifle rounds. To achieve T6 designation, the aluminum is heat-treated by precipitation hardening and aging. This process sounds strange, but it's simple:

Large-scale tempering requires the use of industrial ovens and large quenching vats.

First, the aluminum is heated to 980 degrees (F) for one hour. This dissolves the alloying elements in the aluminum. It is then quenched to harden the metal and prevent the liquid elements inside the metal from precipitating. But this only achieves T4 tempering.

Next, the aluminum is heat-treated at 325 to 400 degrees (F), alloying those elements to form orderly arrays of atoms inside the metal. Think of it like reinforcing a molded structure with a chain link fence.  This is called aging, and this achieves a T6 temper.

You should now be equipped with the knowledge, data, and facts to pick the right lower receiver for your first (or next) black rifle or pistol build. A quick summary: Billet and forged receivers are the most popular and common types available. Polymer receivers are new, ultra-light options that are incredibly to build at home. Cast receivers should be avoided. Metal AR-15 receivers are heat-treated and tempered to achieve the appropriate strength and hardness. More questions? Need help selecting a receiver? Give us a call or email us!